Ray Wylie Hubbard at The Pines 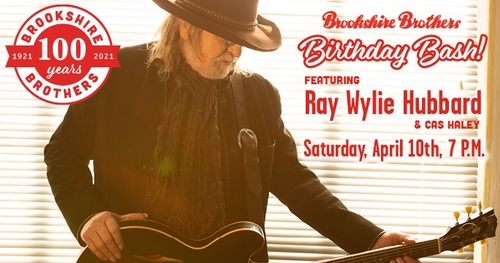 Event Description:
Join us for the Brookshire Brothers Birthday Bash, featuring country music legend Ray Wylie Hubbard and Cas Haley at The Pines Theater in Historic Downtown Lufkin on Saturday, April 10th! Brookshire Brothers is celebrating 100 years of good people, good food, and good deeds with GOOD MUSIC!
Cash bar and concessions will be available during the show.
Early Bird Tickets: Floor - $25 // Balcony - $20
Day of Show Tickets: Floor - $30 // Balcony - $25
Doors: 6:00 PM | Show: 7:00pm | All Ages Show | All Sales are Final.
**please email the host if you require handicap seating**
Ray Wylie Hubbard is the secret handshake amongst those who know. Earthy, real, funky, unabashed, his records have been swapped and played on the road by everyone from Blackberry Smoke and Georgia Satellites to Black Stone Cherry. “Snake Farm” alone could be the red-blooded touring male’s reality-based point of connection.That passion for the man who’s as much a renegade poet as a roadhouse saint brought together an eclectic mix of guests for Co-Starring, his first ever high-profile label release. Ringo Starr, Joe Walsh, the Black Crowes’ Chris Robinson, Ronnie Dunn, Don Was, Larkin Poe, Pam Tillis and The Cadillac Three were just a few who clamored to jam, sing and generally be in the studio with the wizened icon. The Austin Music and Eric Church-inducted Texas Heritage Songwriters Hall of Famer was born in Soper, Oklahoma, went to high school with cosmic cowboy Michael Martin Murphey and spent his summers playing folk music in Red River, New Mexico. It all added to an iconoclastic, hell-bent for truths and textures in writing about the way outlaws live – and added to his outlier bona fides that he made 16 albums without ever signing to a major label.That’s all about to change for the go-to songwriter for Lucinda Williams, Hayes Carll, Pat Green, Jerry Jeff Walker, Waylon Jennings, Slaid Cleaves and Willie Nelson. Whether it’s bluegrass/folk legend Peter Rowan on the tender “Hummingbird,” emerging Nashville renegade Ashley McBryde on the tough girl homage “Outlaw Blood,” SiriusXM femme fatales Paula Nelson and Elizabeth Cook on the randy “Drink ‘Til I See Double” or the trippy rocker Aaron Lee Tasjan on the elegiac “Rock Gods,” Co-Starring is a supple, musky affair.
FAQs
Will the concert be socially-distanced?
Governor Abbott has lifted all occupancy limitations on all forms for businesses, including Fine Arts Performance Halls.
Do I need to wear a mask?
While we are not requiring attendees to wear a mask, they are highly encouraged. Prior to entry, all attendees will have a mask and hand sanitizer available to them.
Are there minimum age requirements to enter the event?
No.
What can I bring or not bring into the event?
No outside food or drinks are allowed. Professional cameras are NOT permitted, however camera phone pictures are acceptable.
Do I have to bring my printed ticket to the event?
You may print your ticket, show your order summary on your phone, or show your ticket in the Wallet app.
Can I purchase tickets the day of the concert?
Yes. You may purchase them anytime on Eventbrite.com or at the box office starting at 6 PM the day of the show.
Location:
The Pines Theater
Fees/Admission:
$20-$25
You may purchase tickets anytime on Eventbrite.com or at the box office starting at 6 PM the day of the show.
www.eventbrite.com/e/ray-wylie-hubbard-the-pines-theater-tickets-145590995587
Set a Reminder: